The Hand of God and Snow Angels

Hi to you bloggers,
I’ve been away for a while due to vacation and Christmas activities.  It is good to be back.  Today’s topic is seeing the hand of God.
Recently, our parish put together something unusual and touching.  We decided to put together a 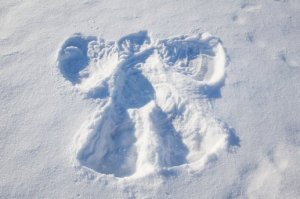 project called “Andy’s Angels in the Outfield.”  An invitation was put out to get participants to line up on a lighted baseball field and to fall backwards into the snow (in zero degree weather) to make snow angels for a recently departed angel named Andy.  Our expectations of a few angels showing up were soon overwhelmed as hundreds of angels showed up for the fundraising event to help the family with expenses due to Andy’s illness.  Although we raised a nice financial nest egg, we raised the spirits of the family and community.
To say that we will never forget, and that love will never die, is part of our faith and our hope.  To express that so well on that night will be remembered.  It was truly a God-event for many.  Tears were shed and hearts were touched.
For me, I had the best seat in the house for the event.  I was in a tower, high above the ball field.  As an organizer, I also knew how things came together.  That itself was the hand of God.  A six inch snowfall days before made for beautiful angels.  The timing of the participants walking in lines across the frozen outfield could not have been better planned.  Everyone was in place with 10 seconds to spare.  The 8 o’clock bell rang, a shout of one, two, three rang across the tundra, and hundreds of angels fell to the earth to flap their wings in support of a fellow family member and friend.  From the tower, it was just like a movie.  Hundreds of colorful angels marching across the snowy white field to land for a moment, before flying in unison while looking into the sky.
I have to believe Andy looked down and smiled because we looked up and smiled.  It is not so hard to believe that heaven and earth can be united.  It happened on a snowy field in Ohio.  That day, the hand of God looked like snow angel wings.

Abortion is an issue that I don’t relish focusing attention on or talking about, especially at Christmas time. The death of unborn children, as we consider Christ in Mary’s womb in anticipation of His birth, seems so incredibly wrong. And yet, with the opening of the new abortion clinic in Lima, it seems essential that something be said.

There are several points that are usually raised when someone mentions abortion as an option: it should be a woman’s right to choose; we’re supporting women; it’s only a blob of tissue, nothing has changed in the fight against abortion after so many years. Let’s take a few minutes to address these issues.

For any consideration of abortion, we need to understand what the action really is. Abortion is the ending of a pregnancy by removing the child growing within its mother. It isn’t a blob of tissue, but a human being. All of the genetic information is present for the child’s physical development. Equally present is a soul, that gift from God that makes us unique from simply being animals.

The child in the womb has been described as a blob, something less than human, so that an abortion might seem okay. Yet the truth is that the child looks very human after only a few weeks of growth, but has been fully human since conception when body and soul come together.

I think some of these false ideas have surfaced when people witnessed the destruction of a human being after the suction machine has torn it apart, much like we don’t recognize the animal in hamburger. In addition, it can only be without faith that we see the developing child as a blob since we are denying the soul’s presence.

With the recognition that this is truly a child, a human being, let’s look particularly at ‘a woman’s right to choose.’ What is she choosing? She is choosing to end the life of her child. Again it appears obvious that we do not see the child as a child for no one is in favor of killing another. We do not have the option to choose to kill other people. We couldn’t kill the child in a mother’s womb unless, in our minds, we make that child less than human.

The other piece that I grapple with is why anyone sees abortion as something helpful to women. The procedures are anything but affirming. For example, a woman who is less than 9 ½ weeks pregnant and has a medical abortion (which is the method at the Lima facility) will be given an oral medication (RU-486) in the office and will be sent home with medication that needs to be vaginally inserted 6-72 hours after that oral medication. Then alone in her home, she will begin cramping and bleeding until the child is discharged. She is left alone to flush her child away.

How is any of that positive for a woman? Did she really know what her choice was? Was she forced to endure this by someone else, economics, or shame? If we truly want to support women, we need to help them with the natural, yet challenging situation of their pregnancy. We need to be there offering support, education, supplies and advice, much like Heartbeat and other Pregnancy Centers.

e trauma of this crime against women and children is how it tears at families. I have heard the weeping grandmother sharing the story of her lost first-grandchild and the sorrow of a young father who was given no option at all about the life of his child. And then there is the regret of the post-abortive woman, whose sadness seems unquenchable.

Things have changed over the years in support of life. There have been laws put in place that would prosecute anyone who forces a woman to have an abortion. The Hyde Amendment prevents federal money from being spent on abortion. The Partial-Birth Abortion Ban Act prevents the abortion of a child shortly before its birth.

Why hasn’t more been done? Perhaps the answer is you. What have you done to fight against this evil? Has it been a focus of daily prayer? Did you join members of St. Michael’s Parish in being a prayerful witness outside of the Center for Choice abortion clinic during 40 Days for Life? Do you write letters to the editor about this issue? Have you called or e-mailed your Congressman?

As Edmund Burke once said, “All it takes for evil to triumph is for good people to do nothing.” It happened during Christ’s life and it is happening during ours.

Jan Kahle, Pro-Life Coordinator for the Diocese of Toledo

To Hell and Back 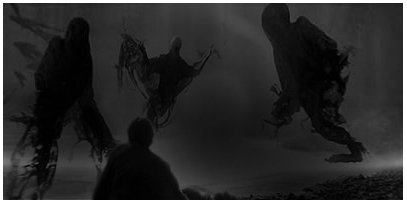 I remember after I experienced such amazing peace and light with a heavenly gathering, I found myself completely alone in such a darkness, where shadows lived and so did pursuant beings.  I knew I would never experience what was once so near and so right.  To be pursued by darkness and nothingness was completely scary.  (If you have ever seen the movie “Ghost” with Patrick Swayzee you may have some idea of the darkness which pursued me.)
I remember the fear, which I have never experienced since, that filled me.  I remember the aloneness.  I remember knowing that I would never be able to leave that place.  My memories of hell were of darkness, loneliness, being pursued by evil and pure fear.  I’ve experienced a lot of fear in my lifetime but nothing like that portion of the near death experience.
There are questions that I have asked myself after I came back.  Why did I go there in the first place?    Why did I go there after I went to the heavenly place first?  What I tell people is that if heaven is like I experienced it, heaven is the place you want to be, and I don’t tell them about the dark vision.
For me, I am not driven by a fear of the darkness.  I am so influenced by the light of the Lord that there is little room for darkness.  To be in the presence of the Lord is heaven.  I see glimpses of that light in my ministry, through people and nature.
I believe in the reality of hell, that people have the capacity to choose to be away from God’s love and other’s love.  I believe hell is living a life without God.  To be pursued with something other than light and never know fulfillment or peace scares me.  To never give love or take love in is hell and darkness.  As opposed to my heavenly vision where there were lots of people, I saw no one in hell.
So get used to going to the light.  It is where we all want to be, forever.